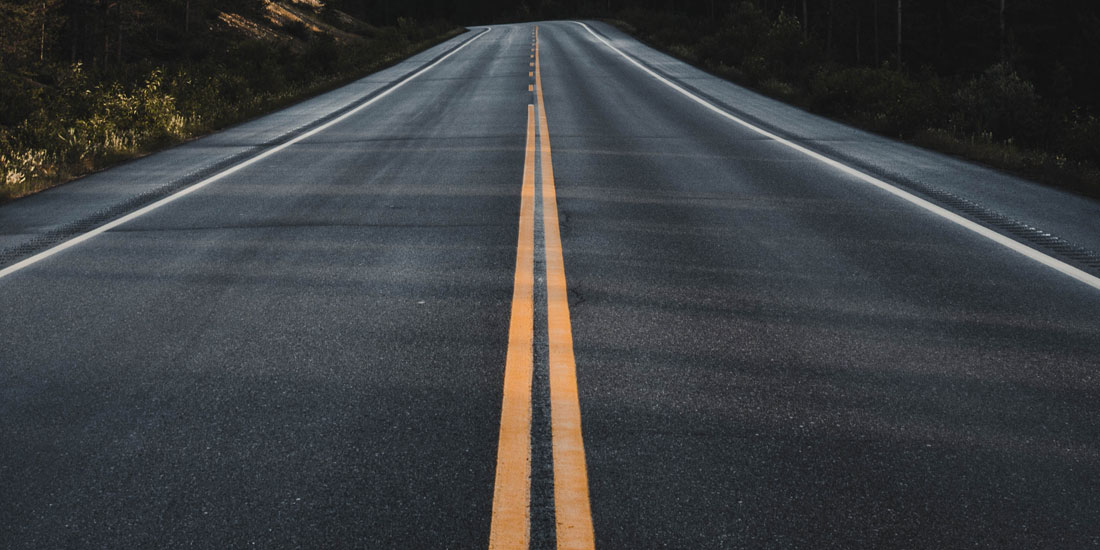 Great. You know your pavement markings!

Pavement markings are important for your knowledge test and safety on the road.

Do you want to try again?

When used, blue markings shall supplement white markings for parking spaces for persons with disabilities.

#2. On a four-lane road you may cross two solid yellow lines to pass other vehicles:

Two solid yellow center lines (a double yellow line) means you are in a no-passing zone. Yo can cross these lines only when making a legal left turn.

#3. A center lane marked on both sides by a solid yellow line and a broken yellow line:

The lane line pavement markings on each side of the two-way left-turn lane consist of a normal broken yellow line and a normal solid yellow line. This lane can be used by traffic in either direction as part of a left-turn maneuver.

#4. Red reflectors on the pavement show:

Red reflectors on the pavement show areas not to be entered or used. They are positioned on the road surface so that only traffic flowing in the wrong direction would observe them.

A normal solid white line separates traffic going in the same direction and means that changing lanes is discouraged. Stay in your lane. You may, however, change lane, if necessary and safe.

A shared lane marking, or sharrow, consists of a bicycle symbol with a double chevron arrow above it and is used on travel lanes too narrow for motor vehicles and bicycles to share side-by-side. Sharrows clarify where bicyclists are encouraged to ride in the lane and remind drivers to expect bicyclists on the road.

#8. When are broken white lines used as pavement marking between lanes?

#9. When you see a solid yellow center line on your side on a two-lane road, you should:

If there are two yellow lines, solid on right (your side) and broken on left, passing is not allowed in this lane. You may, however, cross the line to turn left, if it is safe to do so.

#11. These pavement markings are used for:

Yellow lines separate traffic going in opposite directions. They mark the center of the roadway (undivided highways) or the left edge on divided highways. If you find the yellow line on your right, you are going the wrong way against traffic! Pull over and stop immediately. Turn around when safe.

#13. A white diamond painted on the pavement indicates:

High-Occupancy-Vehicle (HOV) Lanes are indicated by white diamonds in the roadway.

#14. Yellow lines on the pavement:

#15. On two-lane roads, no-passing zones are marked with:

Solid yellow lines are used to mark no-passing zones or the left edge on divided highways.

Road lines and other pavement markings guide or warn you of certain conditions. The help regulate traffic and improve safety.

Markings may be yellow, white, red, blue, or purple. They may be used alone or in combinations. Each has a different meaning.

The Most Important Rules for Your Knowledge Test

Some of the basics include the difference between yellow and white lines (regardless if they are solid or broken):

You should also understand how double lines, single solid lines, and broken lines are used. The general functions are: