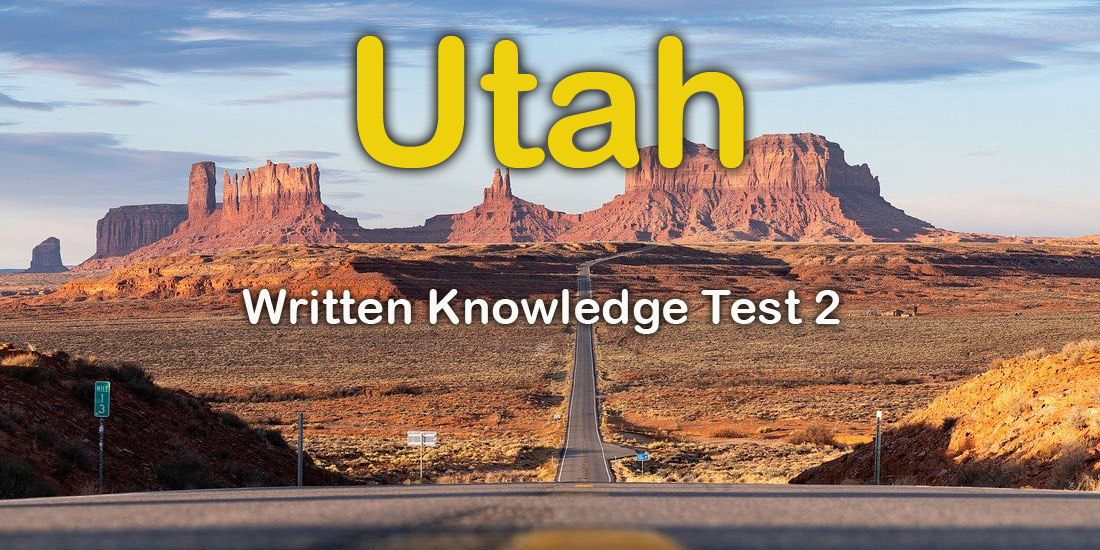 Have you tried these practice tests too?

Sorry! That is not a passing score. Do you want to try again?

#1. The biggest risk with an air bag:

The biggest risk is being too close to the air bag. Ideally leave 10 inches between your chest and the steering wheel. Driver and front seat passengers should be moved as far back as practical. An air bag comes out of the dashboard at up to 200 mph, faster than the blink of an eye. The force of an air bag can hurt those who are too close to it.

#2. A Crossbuck sign at a railroad crossing has the same meaning as:

Crossbuck signs are found at all public crossings. If there are more than one set of tracks, a sign below the cross-buck indicates the number of tracks. The sign has the same meaning as a Yield sign. Be prepared to stop at the tracks if a train is coming. You must always yield to train traffic

#3. If a traffic signal light is not working, you must:

A reflective orange triangle on the rear of a vehicle means the vehicle is traveling at 25 mph or less. All animal-drawn vehicles and all vehicles designed for operation at 25 mph or less must display this standard triangular emblem.

#6. When you overtake a bicyclist, the Utah law requires that you pass:

Special care must be used near bicyclists because any collision with them may result in serious injury. This means that automobile drivers must leave safe passing room and must not turn so close to a bicyclist that the bicyclist is in danger of being hit. Utah law requires a minimum three feet of distance from any bicyclist or vulnerable user of the highway.

#7. If you see a fire vehicle that has stopped in response to an alarm, it is illegal to:

You may not drive or park on the same block where the fire vehicle has stopped to answer an alarm.

#8. Even if it is not marked by painted lines, a crosswalk exist:

There is basically a crosswalk at every intersection, even if it is not marked by painted lines. For this reason, it is called an unmarked crosswalk. 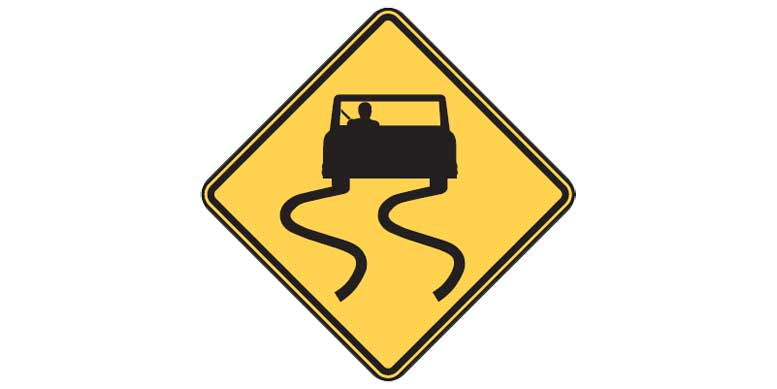 Slippery when wet. This section of highway is more slippery than other roads when wet. Reduce your speed.

#10. Trying to beat a truck to a single-lane construction zone is dangerous because:

Trucks take longer to stop than a car traveling at the same speed. Trying to beat a truck to a single-lane construction zone represents a particularly dangerous situation. Cutting into the open space in front of a truck removes the truck driver’s cushion of safety.

Remember, trucks have longer stopping and accelerating distances, weigh more and are not as maneuverable as cars.

Remember, this is a square sign with a white horizontal line inside a red ball. The sign is not circular. The sign marks a one-way roadway with traffic coming against you. You must not enter from the direction you are traveling.

#12. How can you check your blind spots while driving?

Turn your head briefly. Mirrors should be adjusted before you start driving and will always have blind spots. Do not take your eyes off of the road ahead of you for more than an instant. The vehicle ahead of you could stop suddenly while you are checking over your shoulder.

Tread depth must be at least 2/32 of an inch. It is illegal to drive with a tire that has a tread depth less than 2/32 inch measured in any two adjacent tread grooves at three equally spaced intervals around the circumference of the tire.

#14. When brakes fail and you cannot get them to work, you should:

Shift to a lower gear to help slow down the car. Try to slow down and stop by using your parking brake. If you still cannot stop and are going downhill, try to drive into heavy bushes, snow, or a sandbank.

#15. If your car stalls on railroad tracks and a train is approaching, you should:

#16. Who must yield at a freeway entrance ramp?

Vehicles on the freeway must be given the right-of-way. Merging vehicles must yield. Do not force yourself into traffic. Wait until it is safe to enter the traffic flow on the highway.

#17. When should you use your high beam headlights?

Use high beams outside cities and when no other vehicles are near. Dim your high beams for oncoming traffic. If you are following a car, dim your lights when you are within 300 feet of the vehicle ahead of you. In fog, rain or snow, use your low beams to avoid glare.

#18. When can you legally park your car in front of a private driveway?

Parking is not allowed in front of a public or private driveway.

#19. When a school bus with flashing red lights is stopped on the other side of a four-lane roadway with a median separation, you should:

If you are traveling on a divided highway having four or more lanes with a median separating the traffic, it is only necessary for the vehicles traveling in both lanes behind the school bus to stop, and not the traffic traveling in the opposite direction.

#20. Yellow lines on the road separate:

Yellow lines mark the center of a road used for traffic going in opposite directions.

#21. The small profile of a motorcycle:

Determining the speed of an oncoming motorcycle is not easy. The small silhouette and lack of accurate reference scale can also lead to misjudging the actual distance between the car and the motorcycle. Whether it is a day or night, when you spot a motorcycle, make sure you have accurately judged its speed and distance. Give the scene a second look-and your decision a second thought.

#22. On which side should you pass a vertical panel like this?

#23. When making a left turn at an intersection, you should:

#24. The legal drinking age for alcohol in Utah is:

The legal drinking age in Utah, and all states, is 21.

#25. If you are convicted of driving on wrong side of road, DLD will usually assign how many points on your record?

60 points will be assessed if you are convicted of driving on the wrong side of the road. Except for speeding citations, points may vary plus or minus 10 percent, depending upon the recommendation of the court.

This is the second practice test for your Utah learner’s permit or driver’s license. It has 25 questions based on the Utah Driver Handbook.

What to Expect from the Knowledge Test

You will be shown some common road signs and asked to explain what they mean.

You will be asked to answer several true or false and multiple-choice questions based upon information in the driver handbook, including safe driving practices, driving and traffic laws, and license sanctions.

If You Fail the Test

What happens if you fail the Utah knowledge test?

If there is enough time, you will be allowed to try again the same day. But you can only take the test twice on a single day.

If you fail the written knowledge test three times, you need to pay a new fee.